If Shinji and the gang can fight Angels, surely they can fight coronavirus too! In Japan, there have been a number of COVID-19 awareness campaigns, with even Doraemon getting in on the mask-wearing action. But sometimes, cute characters and charming messages aren’t enough. Sometimes, something much more impactful is needed. For example, Fukuoka Prefecture recently […] 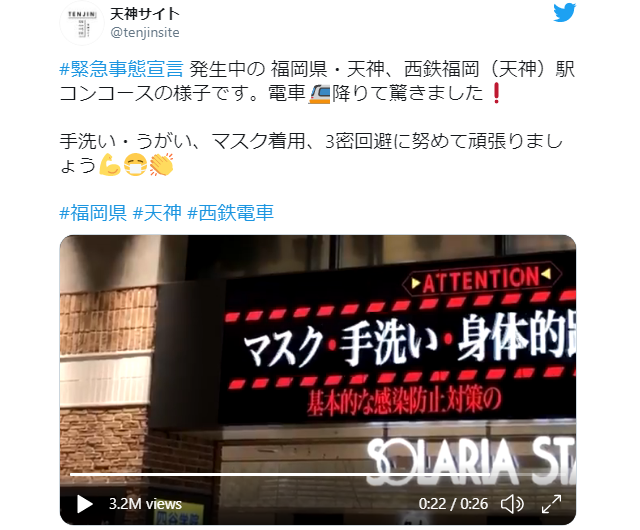 If Shinji and the gang can fight Angels, surely they can fight coronavirus too! In Japan, there have been a number of COVID-19 awareness campaigns, with even Doraemon getting in on the mask-wearing action. But sometimes, cute characters and charming messages aren’t enough. Sometimes, something much more impactful is needed. For example, Fukuoka Prefecture recently declared a state of emergency and needed an effective way to make sure all Fukuoka residents took it seriously. To do so, the team at the Fukuoka Novel Coronavirus Response Headquarters came up with this billboard, posted at the entrance to Tenjin subway and brought to the Internet’s attention by @tenjinsite: ▼ “The concourse at Tenjin Station in Fukuoka during state of emergency. Had a surprise when I got off the train! Let’s wash our hands, gargle, wear masks, and avoid the three mitsu.” #緊急事態宣言 発生中の 福岡県・天神、西鉄福岡（天神）駅コンコースの様子です。電車降りて驚きました手洗い・うがい、マスク着用、3密回避に努めて頑張りましょう#福岡県 #天神 #西鉄電車 pic.twitter.com/8aFxLlzo0R— 天神サイト (@tenjinsite) January 21, 2021 Even non-anime fans will likely be able to recognise the billboard inspired by the font and motifs from Neon Genesis Evangelion. Whereas previous awareness campaigns may have been traditional (or even adorable), this Evangelion-inspired campaign is not only eye catching, but properly instills the seriousness of the coronavirus by conveying a sense of urgency. The billboard’s scrolling message reads as follows: “State of Emergency — a request from Fukuoka Prefecture. To prevent the spread of COVID-19, we are issuing a state of emergency. Please refrain from going out unless absolutely necessary. Especially after 8 p.m, we strongly request you stay indoors. Wear a mask, wash your hands, and keep your distance. Please be vigilant and take proper infection prevention measures.” A representative from the Fukuoka Novel Coronavirus Response Headquarters commented that they hoped the billboard would help young people take notice of the state of emergency. It is on display at both Fukuoka’s Tenjin and Hakata subway stations, with plans to add another display at Kokura station in the future. Japanese netizens had a lot to comment on the billboard: “Guys, we won’t beat this thing unless we use an AT Field (mask)!” “Surely by targeting only young anime fans, this sign is kind of useless? After all, young anime fans aren’t exactly the type to go out after 8 p.m.” “Are young people even into Evangelion these days? Isn’t it kind of before their time?” “This kind of font is hard to ignore!” “Is there a branch of NERV in Fukuoka?” “I can almost hear the battle BGM in my mind when I see this!” Of course, Twitter user @kottinojijo immediately did what everyone was hoping for and added some Evangelion battle music behind the video. 作りました pic.twitter.com/g8PUwP1vbQ— こっちのじじょう (@kottinojijo) January 21, 2021 Hopefully if everyone heeds the billboard’s advice, we’ll be able to overcome the pandemic just in time to see the new Evangelion Thrice Upon a Time movie… if it doesn’t get delayed again, that is. Source: Twitter@tenjinsite via NLab Featured image: Twitter@tenjinsite ● Want to hear about SoraNews24’s latest articles as soon as they’re published? Follow us on Facebook and Twitter!
Read More

Japanese politician posts photo of his dinner, netizens pity him over his depression...

Central League teams out to end Giants’ reign at top

ESIC announced a new round of sanctions today, ranging from one to five years.

Production of chips with new hybrid architecture to ramp this year

Here's A Closer Look At Bloodstained: Ritual Of The Night's...

Out today on Switch.As promised, Bloodstained: Ritual of the Night has been treated...

MONOGATARI fans! Are you ready for this moment? After five years, three seasons,...

Oh, am I so glad that The Promised Neverland is ending next week. Yeah, yeah, I...

So we will grow up someday and have kids who will have all these new-age shounen...