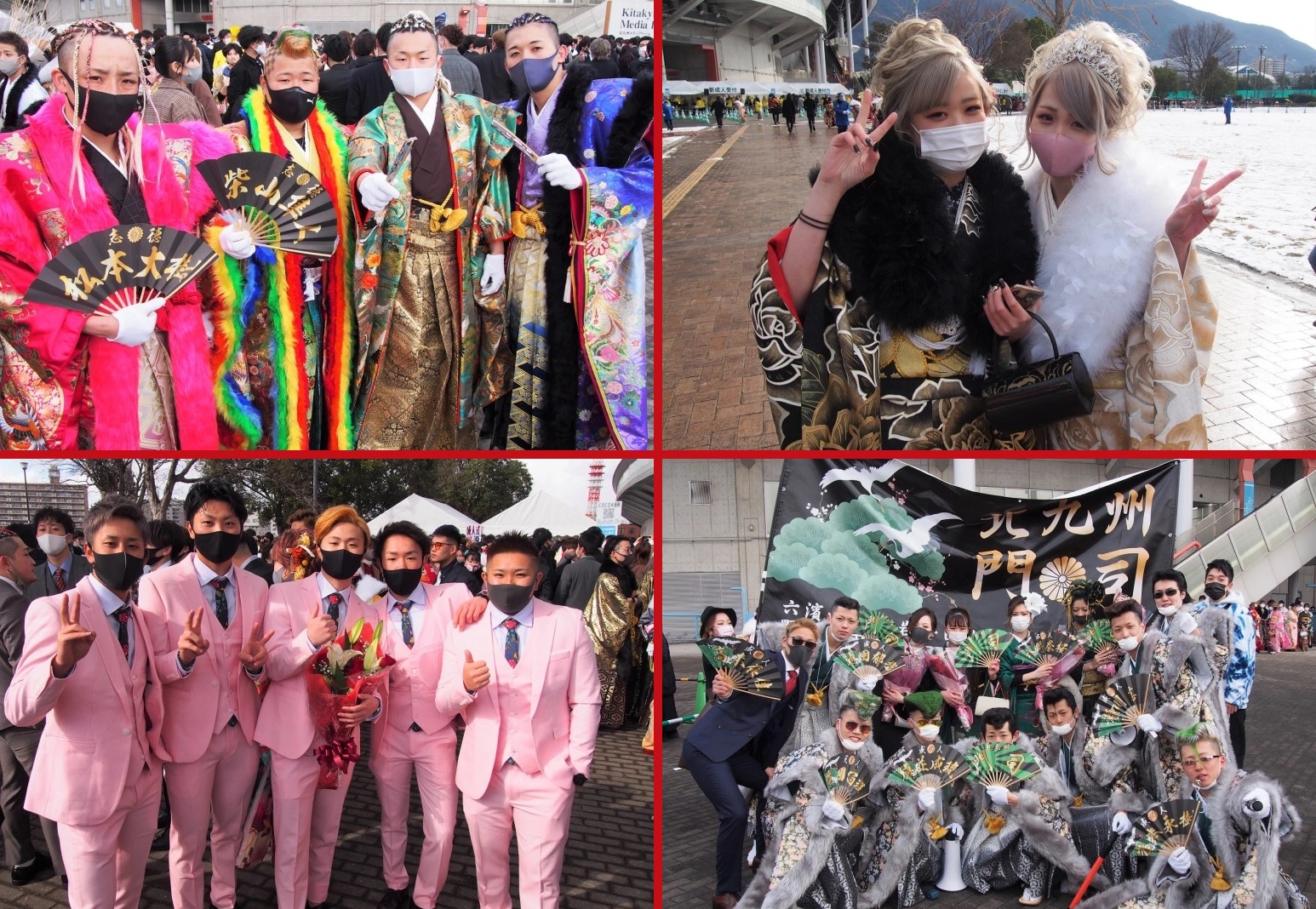 All of Japan has Coming of Age Ceremonies in January, but nowhere has them quite like Kitakyushu. In Japan, the second Monday of January is a holiday called Seijin no Hi, or Coming of Age Day. To celebrate the start of adulthood, communities hold Coming of Age Ceremonies for residents who have or will be turning 20 in the current school year. The ceremonies are held at gymnasiums or amphitheaters, usually with the mayor or some other local dignitary making a speech about the opportunities and responsibilities that come with adult life, congratulating the new adults while also reminding them that society looks forward to their great deeds. In keeping with that solemn atmosphere, in most parts of the country attendees show up in suits or kimono of a formal, classically elegant style. But in Kitakyushu, they do things a little differently. Yes, Kitakyushu’s new adults roll up their Coming of Age Ceremony in suits and kimono, but these aren’t the understated designs commonly associated with office dress codes and subdued adult social interactions. Instead, the goal at Kitakyushu seems to be trying to out-peacock everyone else in town. The motivation seems to come from the attendees’ proximity to the borderline between childhood and adulthood. They’re young enough to still enjoy some crazy youthful exuberance, but also old enough that no one can say “no” to their fashion choices. Group-coordinated outfits are especially popular, and if you’ve got a whole crew of pals to pose with, you may as well have a banner too, many decided. This year’s Coming of Age Day coincided with a nationwide cold snap, but some of this year’s outfits looked especially warm. While kimono seem to be the preferred attire for Kitakyushu’s fabulously flashy, with the right fabric a Western-style suit can be plenty eye-catching too. ▼ A leopard-print suit for the Year of the Cow And it’s not just cloths that attendees put a lot of effort into, but hairstyling as well. A large number of young men opted for gangster-style pompadours. This guy’s for example, was so impressive that he really didn’t need a very extreme wardrobe to stand out. ▼ It takes a lot for SpongeBob to not be the most colorful, outlandish-looking member of a group photo. ▼ Showing localized pride for Kitakyushu’s Kokura district by shaving the neighborhood’s kanji (小倉) in to the back of his head. Of course, there’s no rule that says you have to dress like this if you’re going to Kitakyushu’s Coming of Age Ceremony. Here, for example, two friends showed solidarity with their buddies by color-coordinating with them. But for those who did want to bust loose, the sky was the limit. These looks are pretty far from what constitutes normal kimono styles in Japan, and odds are this was a one-day-only fashion experiment for the attendees, not something they want to incorporate into their regular wardrobe rotation. With most jobs in Japan requiring either a uniform or simple suit, Kitakyushu’s Coming of Age Ceremony is a chance for one last crazy-as-they-want-to-be photo op, and it’s a day none of the attendees will ever forget. Photos © SoraNews24 ● Want to hear about SoraNews24’s latest articles as soon as they’re published? Follow us on Facebook and Twitter!
Read More

Pokémon Valentine’s Day chocolates from Japan are just the thing for lovers who...

When vaccination is a ‘crime’

How to protect students from sexual misconduct

Monkey D Dragon has shown us a glimpse of he’s abilities. Some fans claim that he...

These are the Intel Z590 motherboards desperate for your...

Manufacturers are pulling out all the stops with these flagship motherboards.

Here is a compiled list of the CONSOLE ONLY Dragon Ball series of games, in release...

It’s February now, and I’m getting back onto the rhythm of writing review posts...

Plenty of ways to save with exclusive bundles available now at rightstufanime.com!...

What lies ahead for the headset?

Majesco Entertainment announced that Monster Tale, the beloved and dare I say underappreciated...

The Devil is a Part-Timer! Volume 18 Review

Here’s an excerpt from author Wagahara’s author notes that I’d like to respond to:...

CD Projekt says the patch will improve the game's memory usage and fix a number...